Who are the fairest of them all? Those who can spot a beauty trend before it happens.

“Think of when I can give a woman permanent

make-up. A new face that cannot be wiped off. A lifetime beauty mask!”

That’s what the chief cosmetic chemist of May Fortune Cosmetics said to secret agent Patricia Foster in the 1967 Doris Day spy spoof, Caprice. Centred on industrial espionage in cosmetics, the film showcased ideas that at the time were as likely as life on Mars – water-repellent hairspray, indelible maquillage,

Fast-forward to today and these products are a dime – or rather, a few hundred dollars – a dozen. Day-long lip stains as natural as a just-bitten lip, make-up tattoos that last a year or more, anti-aging skin-care formulations that profess to turn back time. Today’s future concepts seem equally intangible. “Intelligent” make-up, where the colour adjusts to lighting, fragrance that customises to body chemistry, blush that deepens by touching the cheek. But far from employing the cloak-and-dagger methods used in Caprice, today’s cosmetic giants adopt more ethical methods of make-up one-upmanship – beauty futurologists.

Enter Jeanine Recckio (pictured left), leading beauty futurologist and president of Mirror Mirror Imagination Group, a New York-based think-tank that develops new trends and bridges the gap between unfolding consumer demand, research and development labs and beauty boardrooms. It’s Recckio’s job to sniff out what consumers want before we even know it, then deliver this information to the cosmetic houses. She’s a missing piece in the puzzle of our cosmetic future.

She has been responsible, alongside make-up maestro Kevyn Aucoin, for pioneering the

no-make-up make-up look; she consulted on the relaunch of the dynamic Helena Rubenstein spa in downtown Manhattan; and she’s the woman who sent Revlon in to a spin with her one-dose lipstick samples.

She laughs heartily about the lippy samples: “I was studying cosmetics, toiletries and fragrance marketing at New York’s Fashion Institute of Technology. At the time health concerns meant it was illegal to have

on-counter testers. It freaked the industry out – how could you sell a lipstick if you couldn’t let the customer try it?

“For a marketing assignment I developed a

strip – like fragrance strips in magazines – which you pulled open to receive a one-dose sample of lipstick. My teacher showed it to a friend at Revlon and it happened that they were working on same concept.”

Fearing industrial espionage, Revlon summoned Recckio to its Fifth Avenue offices. “It was so intimidating, but they offered me a job on the spot. I started as assistant marketing manager the day I graduated.”

Mirror Mirror was born in 1995, when Recckio recognised a gap in the cosmetics industry that was waiting to be filled. “In cosmetics, when business is good, things are great,” she says. “But when the numbers are down on your new nail colour and your boss wants to know what you’re going to do about it, where do you turn? These big companies are

all leaders together. Email has wiped out all kinds of administrative support. You’ve got very young management – and the cosmetic industry has replaced a lot of the creative rebels with

all these masters of business who – bless them dearly – don’t really know a trend from a number.

“We find the trends. Things happen in society and no-one was out there connecting the dots to see what impact these things had on the beauty industry and beyond.”

“It’s guidance for the cosmetics industry as well as industries across the board – car companies, liquor companies, ad agencies,” says Recckio.”

It’s no surprise that citrus vodka was a craze. At the time, all the fragrance flavours were citrus notes.

“Now there’s a cucumber craze in New York. At dinner a few weeks ago we were given the latest house drink, a gin-based cucumber drink, which is so on trend. I have a client right now who makes a scent for [US-based cosmetic house] Bath and Body Works, called Cucumber Melon. It’s their number-one scent after Raspberry. And we just went through a raspberry martini trend.

“In between there was the brandy martini, seen on Sex and the City, which has been a big, big fragrance in shampoo.

“Then there’s cosmetic packaging. A while back, it was all sleek and black. So were all our cars. Now all of a sudden, in cars, cameras, compacts and even home decorating, we’ve been going very chrome, very silver, very chic and very modern.”

Talking to Recckio, you envision a dome of silence over her desk. Almost every sentence begins with an apology for being unable to discuss a current project. She’s been working with Ralph Lauren, but won’t say anything more than: “It’s a patent-pending make-up concept.” Other clients include LVMH/Christian Dior Beauty, Estee Lauder/Donna Karan Beauty and The Body Shop – again secret projects.

The journey from concept to counter, while exciting, can be as frustrating as the mandatory secrecy surrounding Recckio’s work. “It can be long and hard because these companies test-market it to death.” But, citing a recent Avon development, she adds: “Most of the time it is great. I had an old hatbox that I paid five cents for at a flea market. It was sitting in my office about to go into storage. Avon called wanting some quick packaging ideas. I looked at the hatbox and said, ‘Let’s make it a pink hatbox with a zebra lid.’ Next time I walked into Avon there was my hatbox. I had to giggle because I know that the box came from a little old lady who is probably now in her grave. Her hatbox is going onto the shelves of Avon.”

As for the future, Recckio believes that we are only limited by our imagination. “It’s all about challenging the R&D people. We have the technology to create amazing things. We just need to push boundaries.

“The future of make-up is air-brushing. It’s already happening and it literally air-brushes make-up on to give an incredible flawless foundation finish. There are make-up artists who can do a whole face standing six inches away from the girl. I’ve seen them put on eyeliner, eye shadow, cheek colour.

“There are technologies that we are twisting a bit and applying to beauty. Thermo-chromatic pigment has been used in fabrics out of Europe – you touch it and the warmth from your hand leaves a mark on the fabric. We want to apply the concept to a compact or blush so that it would actually change colour and deepen when you touch it. We can apply it to hair as well. You could touch your hair and it would change colour.”

Very high-tech, but is it really all that glamorous?

“Let’s face it – no, it’s not. Whether you’re a beauty editor or at the marketing end, it’s hard work and a

but often it is the woman with the white coat, quietly sitting in the corner, who’s choosing the lipstick that guarantees you a healthy sex life for the next five years.”

3. Chantecaille cream (based on flower pharmacology, aromatherapy and Chinese medicine), $250. 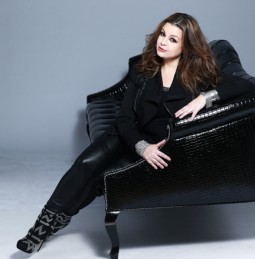